Some people refer to Pontoon as the British version of American blackjack. Like other blackjack games, the objective is to get not more than 21. 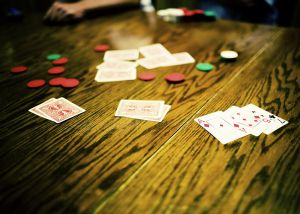 Pontoon blackjack is one of the popular variations of blackjack plaid in casinos today. It is played in land based casinos in the UK, Australia and Malaysia with some variations from one country to another. In the UK it is seen as a variation of the American blackjack while in Australia it is considered more as a variation of Spanish blackjack. Even though blackjack games are usually played between each player and the dealer directly irrespective of how many other people are playing or watching, Pontoon blackjack table in a land based casino averagely permits between five and eight players at one time. It generally uses 52 cards on a standard deck but can increase the number of decks to two incase there are more than eight players at the table. Thus, rules of blackjack may vary.

How to Play Pontoon

As with all blackjack games the dealer issues each player with two cards face up start with the player to his left and going round and back to himself. The dealer only has one card up and is not allowed to see the face down card until all the players shall have completed playing their hands. Once the players have been dealt two cards each they then proceed to make their bets beginning with the player to the dealer's left going clockwise. The dealer does not make a bet.

The objective is to obtain a Pontoon which is a total of 21 from the initial two cards. A Pontoon is the best deal you can get in the game and pays in the ratio of two to one. It is only possible to obtain in the initial cards dealt if a player gets an ace and a ten value card game. A king, a queen and a jack are ten value cards along with the ten itself. Getting any of these ten value cards and an ace is a Pontoon. It`s a part of Blackjack tips actually.

A player can be declared a winner if by hitting the fifth card the player does not bust. It is another ideal condition that is second best only to the Pontoon. A player who ends up with five cards without exceeding 21 is paid in the ratio of 2 to 1 like in Pontoon irrespective of whether the figure is close to 21 or not. Players with 4 or 3 cards but whose totals are 21 rank next after the five card players. Their superiority is considered in terms of the exact totals in comparison to the dealer's.

If the previous game was won by a Pontoon then all cards are shuffled. But if there was no Pontoon then the dealer puts aside all the cards which were initially dealt to players and is some advantage for the next round as players can remember which cards are out.